Came back from Taiwan 3 days ago. Now that I am back to my usual routine, back to work, I thought I should write a bit about my 7-days trip while the memory is still fresh.

Supposed to take off at 0055hrs, my flight had a two hours delay back because of an issue with the plane’s radar.

Captain apologised and claimed he will try to get us to Taiwan in the soonest time. In my half-asleep mind, I imagined that meant the Captain would be stepping on his “acceleration pedal” harder so that the plane would fly faster.

The flight was uneventful (thankfully) and like all night flights, I was slipping in and out of sleep.

I arrived at Taiwan’s Taoyuan International Airport bright and early on 15th October. Unlike the previous time, I did not have to wait 7 hours in the ice cold Taoyuan Airport Terminal 1. Went through the Customs without any issue, collected my luggage and hopped on the convenient express train to central Taipei.

Amazing place. Massive and full of energy. One can easily get lost in its underground level.

Very spacious. Interestingly, you can find people sitting on the ground right in the middle of the whole thing.

Alighted at Taipei Main Station, I marveled at the colossal structure and its extensive underground level. Crowds of fellow travelers making their merry way give the place a lot of energy. Since I had some time on my hand before meeting up with Constant Companion RR, I dropped off my luggage at the hotel and searched for some breakfast.

With Google Map, I located this joint which serves beef noodles nearby.

Something sweet to start the day right! Beancurd with peanuts.

With Google Map, I located a shop near my hotel which specialised in beef noodles. Finding the shop was easy enough, just a couple of turns around the block. Very old looking shop, definitely been around for a long time. Their beef noodles come in two variations; “Pure” and “Hong Shao” (red braised). Between the two, “Hong Shao” is definitely more flavorful but I opted for the “Pure” version, thinking since it was breakfast and I should not have something too “heavy”.

The soup was clear and lightly flavoured. The noodles were a little too “al dente” for my personal liking and almost thick enough to secure boats to moorings. It was a decent bowl of beef noodles.

After that, I went back to Taipei Main Station where I had a classic dessert beancurd with peanuts.

Constant Companion RR and I went back to Taipei New Horizon Building, which is near to Songshan Cultural and Creative Park, specially for the “instant noodles” from this particular stall (old brand; has other outlets as well) at the basement.

However, I was largely disappointed by this second trip there.

The attendants were unfriendly and mostly stood behind the counter, waiting for us to step up to place our order. What made this more unacceptable is that on the tables, were stickers with wordings to beseech dine-in customers to return their empty dishes when they are done eating.

Returning the dishes is not a big deal, but because the table tops were covered with grease and bits of food from the previous diners, it made the attendants seem even more lazy for not wiping the tables down.

Food wise, it was okay. The chicken feet felt harder to chew and the vegetable was so fibrous that there were a couple of times I simply could not bite through them. Maybe if the service and cleanliness of the eatery were better right from the start, I would have enjoyed my meal a lot more and not nitpicking so much.

During my 7 days in Taiwan, I have had this traditional dessert 3 times (twice from the same lady pictured above). In the nutshell, it is made of candied peanut shavings, ice cream, coriander (optional, but recommended) wrapped in a flour crepe.

Egg Pancake. Remember to eat this with a bit of the sauce provided.

Soy milk, glutinous rice, pork floss, fried dough stick and egg; these are the main component of a traditional Taiwan breakfast. You can get quite a few different food combinations to suit your personal preference.

Though normally deemed as “breakfast” items, they are readily available through the day. In fact, some really popular shops are opened for business 24 hours.

My love for glutinous rice is well known among my friends. Tried the glutinous rice roll for the first time during this trip and I got hooked. In a thick (or thin; each shop is different) layer of glutinous rice, there is a generous serving of preserved vegetables, pork gloss, an omelette and a fried dough stick. Every bite is a crazy mix of texture and savory flavours.

I will always remember my first glutinous rice roll which was made like a brick, unlike the subsequent ones which were slimmer.

Extremely filling and convenient to eat, I would recommend this for any road trips.

My second rice roll in Taiwan. It is rolled much slimmer, making it easier to eat. 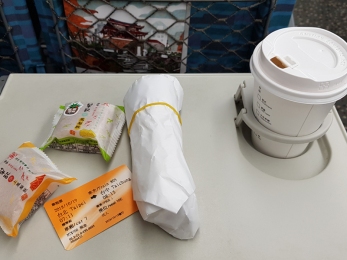 I had it on the High Speed Rail to Taichung too!

It was bought the night before, but still pretty tasty!

I will stop here for now. Stay tuned for Part 2! Thanks for reading!