I have meant to write in detail, about my trip to Italy in May 2018, but somehow I did not get around doing so. This was partly because I was clueless on how to blog about trip, and mainly due to laziness.

Browsing through the trip’s photos a few days back, I made a decision to start by sharing my experience in Vatican City.

Since these all happened back in May, I will try my best to remember every little, interesting details.

It was a gloomy, rainy afternoon. With our gelato of the day in hand, we watched the hordes of people queuing to get in, weighing our options (and chances) of getting into Vatican City.

Earlier on, we were approached by a man on the street, offering us an opportunity to skip the massive queue by doing a guided tour with his agency.

While I do not know exactly how, but I think guided tour agencies have connection to get advance tickets in bulk and at a discounted price.

For a small fee (I cannot remember how much, sorry), Constant Companion RR and I signed up for one of their afternoon, English-speaking guided tour in Vatican City.

We loitered around outside the tour agency under a very slight, very annoying drizzle, waiting for the allocated timing for the tour. Once all members of that day’s tour have gathered, we were herded by a man with an umbrella, to another building a good 15 minutes walk away, where we stood around and waited some more presumably for the umbrella man to get our tickets.

With Mr.Umbrella, we marched to what seemed to be the “Guided Tour Entry” of Vatican City where we were handed over to our guide for the day, Deborah. With a quick introduction and a few ground rules, she ushered us through the entrance. After getting checked by the Vatican City security, we got hooked up with receivers and earpieces so Deborah could speak to us over all the noise and the many, many other tourists. It was a very chaotic scene.

After much effort from Deborah, we were finally given our tickets and another reminder of Deborah’s ground rules. After a little over an hour from the time we congregated outside the tour agency, with our tickets in hand and earpieces in ear, we were finally ready to see Vatican City!

To be frank, I cannot remember the exact details or information Deborah passed down to us over the receiver, during the tour. However, here are some of the photos I have taken as we walked through Vatican City in chronological order! 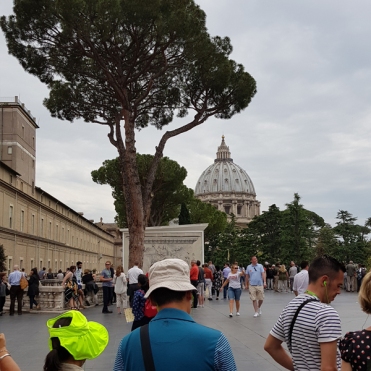 There were restoration going on as seen from the difference between these two buildings.

Giant statue of an artichoke.

Our guide told us something about “Roman copies”.

The statue’s sole looks like it has been walking.

At one point I had a strange thought to myself. Every single day, there are thousands and thousands of visitors who walk through these buildings and every single one of us is under strict restrictions and the watchful eyes of the security.

Yet the Pope, being the man-in-charge, can basically walk through these halls, by himself, without any interference from anybody. I was very impressed by that fact. 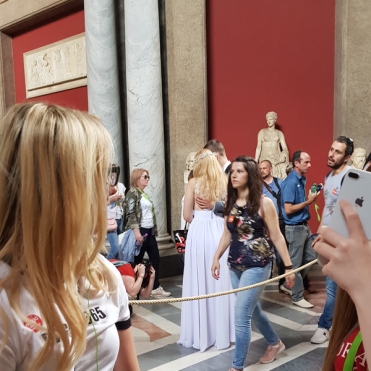 You can get really close to some of the displays.

Hole in the ceiling.

A gift from Egypt.

Insane amount of work and details.

According to Deborah, this ancient map is very accurate despite being created without GPS.

Interesting motif on the ceiling.

I believe the Pope addresses the masses from that balcony.

Near the end of the tour, we were brought into the famous “Sistine Chapel“. As no photography was allowed in there, I being a law-abiding person, did not have any photos to share. Right before we entered the room, Deborah instructed us that she would give us some time to linger in the chapel and when we felt that we have had enough, she would be waiting for us at the back of the chapel. She emphasized that it was very important that we do not exit the chapel without her because we will not be allowed back in and it would be next to impossible for us to reunite after that from the sea of people. With that, she entered the chapel with us in tow.

Needless to say, I was in awe being in there, surrounded by all the Renaissance masters’ work. Constant Companion RR and I took a few minutes to stand in the middle of the dark and cool chapel, to admire all the artwork. All the while a man spoke “softly” but strictly into a microphone, reminding all visitors not to talk too loudly and do not take any pictures. A couple of times, the man actually pinpointed a couple of tourists who were attempting to snap a few shots sneakily.

Constant Companion RR and I could hear the voice of Deborah from our earpieces as she constantly talked (softly) to us over the receiver, reminding us that she was waiting for us at the back end of the chapel. The sheer amount of people in the chapel means that despite having a “Silence is Golden” rule, the amount of noise being generated was still pretty significant. As she was trying to speak softly through her microphone, Deborah’s voice was easily drowned out by the background buzz.

When Constant Companion RR and I decided that it was time to go, we headed towards the back of the chapel where Deborah said she would be. Not surprisingly, we could not locate Deborah or the rest of our tour group. When we saw the young couple (from Hong Kong) whom we recognized were from our tour group, taking the exit on the left out of the chapel, Constant Companion RR and I simply followed them.

The exit took us through a narrow, long and bendy walkway. With each bend we took, Deborah’s voice on my earpiece got softer and more distorted; I felt that we were heading the wrong way. Before long, we stepped into a bigger room, past a single security, when we realised our mistake.

At that point, there was nothing stopping us to walk away on our own (like the young couple of Hong Kong; they were probably still clueless), but Deborah mentioned that each receiver that was on loan to us was signed off by her and she was liable to pay for any loss/ damage. Since we do not want to get our poor guide into trouble, we headed back towards the chapel.

The single security at the “exit” looked at us and when we explained we were in a tour, he allowed us back in through the narrow, long and bendy walkway where Constant Companion RR and I had to walk against the flow of human traffic.

This time, back in Sistine Chapel, we found Deborah easily (strange) and rejoined the group. Till this day, I sometimes wonder what happened to the young couple from Hong Kong.

That was my trip to Vatican City. Getting in was a hassle, but it is worth the effort and time. Would recommend anybody to visit at least once.