Right after Rome, Constant Companion RR and I got on a train and headed straight to Milan. After an uneventful and comfortable 3 hours ride across lovely greenery, we arrived at Milano Centrale railway station.

Compared to Rome, we have spent a shorter time in Milan. While the city certainly has its own charm, I personally find Rome to be more interesting. Milan with all its luxurious shopping districts and high fashion reminded me too much of work.

When I look back at the photo album for the trip on my phone, there are hardly any pictures of Milan. I will probably write about my time in Milan, generally, and share whatever little pictures I have in another post.

This entry is about the highlight of the trip; visiting Duomo di Milano.

Click on “View Full Size” to enjoy the Panoramic Shot!

My favourite shot of the cathedral.

Clear blue sky with random, fluffy, white clouds floating around; we were lucky to have chosen such a lovely day to visit Milan Cathedral. The square outside was packed with visitors and street peddlers (of course).

To get a feel of things, Constant Companion RR and I went one round around the cathedral. It is amazing how the structure is so heavily covered with detailed and intricate decorations. Taking it in whole visually can boggle one’s mind.

After figuring out where to get the tickets, we bought the package which gave us access to the roof. There are two options for roof access; you can choose between climbing up using the stairs or the slightly more expensive alternative of using the elevator. We picked the former option, thinking that it would be more fun and also, Constant Companion RR has the constant need to chalk up the amount of physical activity.

With our tickets, we joined in the queue to enter the cathedral. After an extremely strict inspection by the security, we stepped into the fourth largest church in the world. 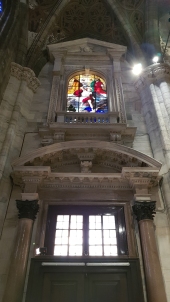 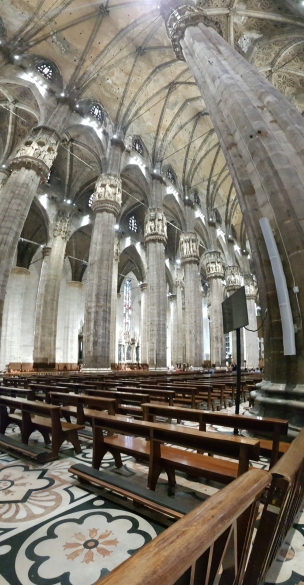 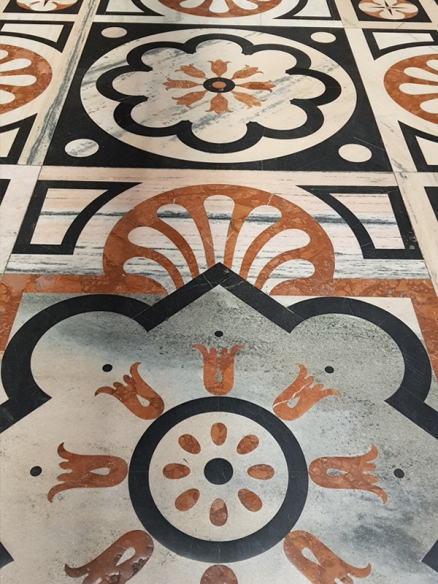 Check out those statues on the columns. 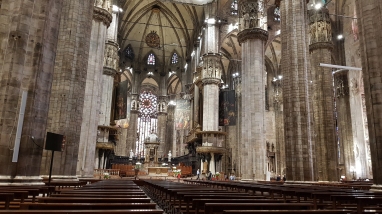 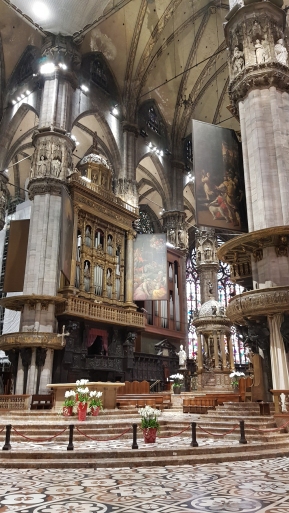 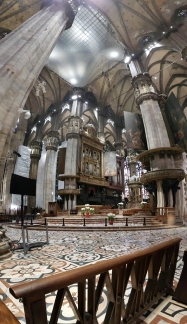 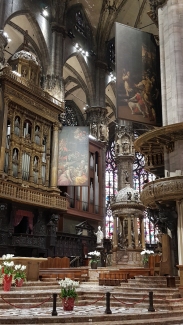 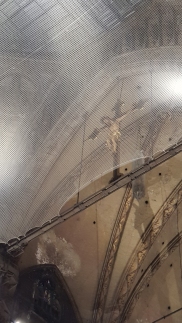 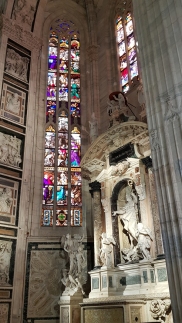 More stained glass of stories from the bible.

Reminds me of a character selection screen in video games.

Coming in from the long wait under the hot sun, we were welcomed by the cool interior of the church. Within, the church was a sanctuary of peace and tranquility. Completely opposite of what it was like outside, it felt like we have stepped into another world.

Initially, I thought it was too dimly lit but that was only because I was under the glaring sun for so long outside, waiting in the queue.

For photography, you will most likely need to make some adjustment (aperture/ IOS/ shutter speed etc) if you do not want your pictures to be underexposed/ blur. All my pictures were taken with my phone which I let to automatically decide the settings for me. While the pictures look fine on my phone’s display, on a bigger screen (like on my laptop’s screen) some pictures are lacking in quality.

Duomo di Milano is as impressive inside as it is outside. The laboriously decorated ceiling is held by massive, heavily adorned columns. There are colourful stained glass windows on solid stone walls, lit by natural sunlight.

Constant Companion RR and I sat on the pew for a while and enjoyed the serenity. 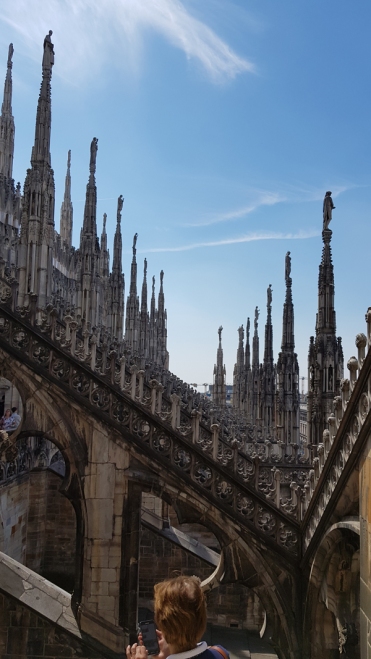 Lots and lots of statues. 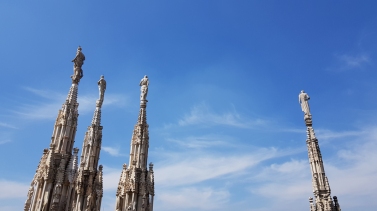 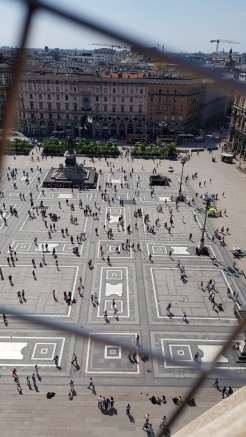 The Square below. People looking like ants from here. 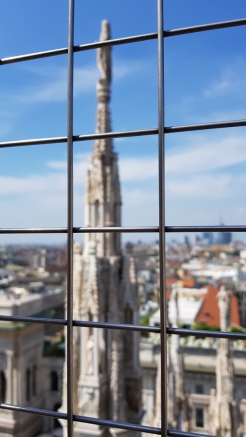 We were definitely not alone.

To get to the roof top, Constant Companion RR and I walked up a very narrow, very long, squarish and spiraling flight of stairs.

With no point of reference; we did not know how much more to go or how much have we done. Everything looked the same. There are some tiny windows which grant a view outside, but because the walls are so thick and the “windows” are practically slits, we could not see much. A few times during our climb up, I felt as if we were making no progress, trapped forever in a magical never-ending flight of stairs.

On the rare occasion when we encountered descending visitors, as the staircase was just wide enough for one person and one of us would have to give way to the other by standing close to one of the corners where there are more space.

After what I think realistically was 5 minutes (but felt much longer than that), we reached the top and everything opened up.

On the roof, we spent a good 30 minutes taking pictures and enjoying the stunning view of the surrounding from this vantage point before heading down via the same flight of stairs, which was a lot easier this time.

Before and after the cathedral, Constant Companion RR and I wandered around its neighbourhood which was a shopping haven. We had lunch at a super touristy restaurant where I had some mediocre pasta. For dessert, it was gelato (of course) from a shop which claimed to have been established for a long time.

That is it about our trip to Duomo di Milano. Thanks for reading!