Was going through with the third chapter of the video tutorial yesterday which teaches how to do “Lumenesque Scrollwork”. With further research online, I found it is very similar to a “Flare Cut” which basically have the engraver making two cuts on each sides of a line, ending up with a raised surface in the middle. Intrigued, I went deeper into my research on the topic of “Flare Cut” where I came upon an article in a forum with a link to a YouTube video.

I popped over to YouTube and watched the video where a gentleman was sharing this graver which makes making “Flare Cuts” easier. Immediately after watching, I decided to grind myself up one of those gravers.

Using an existing graver (a 50 degree one which makes cuts too narrow for my liking), I tried to rough one out based on my understanding of the geometry of this new graver shown on the video. Surprisingly, it worked well enough!

Because I want to make it easy for myself to replicate this graver whenever I want next time, I had an idea of “modifying” my sharpening template by cutting the needed angle. Spent quite a bit of time working on that, created a lot of annoying acrylic dust. With the graver that was already cutting decently, I used my modified template to rework the geometry.

In the end, my graver didn’t even cut into the metal, sliding along the surface as I attempt to engrave with it. I definitely must have messed up with my calculation of the angles, and screwed up my graver with my attempt to “streamline” things. I went to bed with a heavy heart. 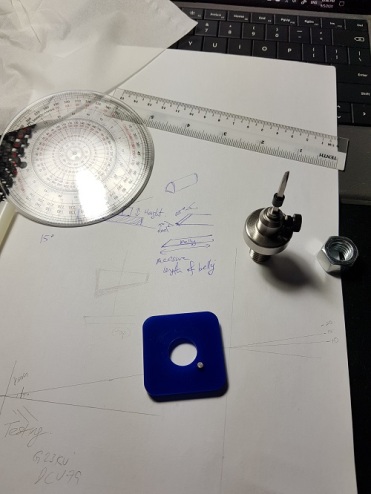 This afternoon, I watched the video again, focusing on the part where the gentleman was briefly describing his graver, showing it on screen before his demonstration. With a refreshed idea of how the graver should be, I went on to grinding it by hand.

I went back and forth between grinding and engraving until I finally got the graver to cut decently. With this experience, I learnt a bit more about how the angles of gravers should work, which gives me more confidence to grind my gravers without using templates, and try new geometries next time.

Now the graver is cutting again, I might have to fine tune it later. For now, I will just enjoy engraving with it. 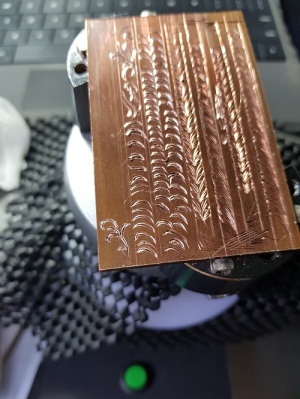 Like I have mentioned in my previous post, my current setup has a lot of power; the impacts of the ball bearing within the barrel is now capable of knocking the barrel out from the handle. Previously, I held the barrel and handle together with the use of masking tape, but it is not longer a viable option.

Facing yet another new issue, I brainstormed for a way to secure the barrel and the handle during operation. I was toying with the idea of drilling a hole through the handle and partially into the barrel and then secure the two parts with a bolt and a nut (glued outside on the handle with epoxy resin the same way I did with the 2mm round rod sharpening holder). The idea was quickly dismissed because curing the epoxy to its full strength takes about 8 hours and the whole thing seems overly complicated. Drilling into the barrel is especially off putting to me; the risk of drilling through completely is quite high.

I needed a more “elegant” approach to this. In the end, I made a straight cut on the extra “alignment bit” on the barrel and the handle where I used a bit of a 0.8mm steel wire which will act as a latch to fasten both parts together. At the end of the 0.8mm steel wire, I put a bit of of blue tac so I can easily remove it when I need to open up the hand piece.

I was also considering drilling straight through the handle and the “alignment bit” of the barrel and sticking the wire through as the result would look more pleasing. However, the rounded surface of the handle and the hole required, to go through both sides of the the handle with the “alignment bit” in the middle, is way too long. Lacking the confidence to drill a straight and even hole under such circumstances, I threw the idea out of the window.

During operation, the air pressure would push the barrel forward which means that the bit of steel would be tighten even further. This current method works well enough.